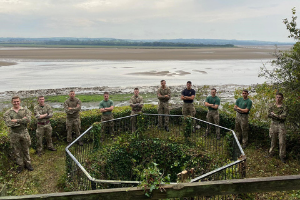 Members of 54 Commando Squadron, based at Chivenor have recently upgraded a section of the Tarka Trail as part of their training, in conjunction with Devon County Council and North Devon Council.

The path that leads from the Tarka Trail over the lime kiln bridge at Ashford is regularly used by members of 24 Commando Royal Engineers to conduct loaded marches and runs around the country lanes north of the estuary between Braunton and Barnstaple. However, in recent years the path had become very overgrown, eroded and was in need of improvement work.

As a military force the Royal Engineers support the Royal Marines on exercises and operations all over the world. One of their standard tasks is to upgrade damaged routes to allow military vehicles to move through an area.

Major Andy Brett, commanding officer of 54 Commando Squadron says: "When I used the path for runs, it struck me as an excellent training opportunity. It would allow us to practise some skills such as the use of chainsaws to clear trees, which would prove particularly useful if we had to deal with a hurricane zone. We could also conduct a small route upgrade with the added training value of more technical engineering design considerations to deal with the large amount of rain water run-off that was previously flowing over the bridge, off the A361 and the adjacent hill.

"We are currently held at readiness to deploy to natural disasters anywhere in the world, currently focused on reacting to hurricane disaster zones in the Caribbean. We infrequently get to conduct ‘real life’ tasks due to training constraints on military training areas, and finding the time during a busy year of overseas deployments, so this was a great opportunity."

Leader of North Devon Council, Councillor David Worden, says: "We are extremely grateful to Major Brett and his team of Commandos for the work they have done at Ashford lime kiln. Our parks and leisure team were aware of the problem with this section of the Tarka Trail, but were unable to find the budget to carry out the works themselves.

Here in North Devon we are very proud of our association with the Commandos based at Chivenor, and we are so grateful they were able to spare some men to do this work, which has not only given them some real life experience which they will be able to use when in a disaster zone; but has also benefited our community by improving a well used section of local footpath."

Councillor Stuart Hughes, Devon County Council Cabinet Member for Highway Management, says: “The Tarka Cycle Trail is very popular with locals and visitors to the area, not only for the safe, traffic free cycling but also for the natural and historic environment it passes through.  We are grateful to have the Commandos carry out these works which will improve access to, and appreciation of this historic feature.”

It took a total of six days for 12 Commando Sappers to clear the vegetation and lay the upgraded path, improving drainage on the bridge and along a section of the Tarka Trail. They were also able to clear some of the vegetation around the top and sides of the lime kiln, exposing and improving access to a wonderful viewing point across the estuary from the top of the lime kiln.