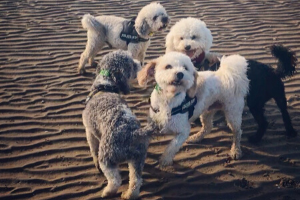 The North Devon community is being asked to share its views in a consultation looking at possible new controls to deal with the minority of irresponsible dog owners.

Owning dogs is a positive way of life for many residents and visitors and North Devon prides itself on being a dog-friendly area. The council is keen to ensure that the vast majority of responsible dog owners are not tarnished by the small minority of people whose anti-social behaviour causes problems for everyone else.

At a meeting of North Devon Council's Strategy and Resources Committee on Monday 1 June, councillors decided to carry out a public consultation on plans to introduce a new Public Space Protection Order (PSPO). The PSPO would introduce controls to help address antisocial behaviour associated with dog waste and uncontrolled dogs, whilst providing dog owners with open spaces where they can freely exercise their dogs.

The council is keen to ensure that the measures it adopts are the least restrictive available and has taken guidance from The Kennel Club, which has made recommendations for local authorities to reduce the risk of unfair and disproportionate controls on responsible dog walkers. The council is also interested in exploring alternative non-regulatory alternatives and is asking residents and visitors to share their ideas in the consultation.

The nine week consultation will start on Monday 8 June and aims to gain the community's views on some proposed district-wide control measures at sports pitches, cemeteries, enclosed play areas and high tide roosting sites and also on specific locations where dog fouling and dog control are a problem. This includes some beaches (Saunton Sands, Woolacombe Sands, Putsborough Sands, Instow, Croyde Bay and Combe Martin), the Tarka Trail, and Braunton Burrows.

The measures would give each private landowner discretion on how they wished the PSPO to be enforced and failure to follow the controls could result in a Fixed Penalty Notice (FPN) of £100.

North Devon Council's Lead Member for Environment, Netti Pearson, says: “While the majority of dog owners are responsible, there is unfortunately an irresponsible minority who do not pick up after their dog or allow their dogs to run out of control. This kind of behaviour interferes with the enjoyment of our beaches and open spaces by other users and we want to do something about it. This consultation is not about vilifying dog owners; there are significant and positive public health, social and economic benefits of dog ownership. The proposed PSPO simply aims to address the antisocial behaviour associated with dog fouling and control that is unfortunately an ongoing problem amongst a small minority in our district.

"We want to hear as many views from as many of our residents and visitors as possible in this consultation. It may be that some people have some ideas for dealing with these issues that we haven't thought of and we want to hear them. Please take the time to share your thoughts on how we can deal with this ongoing problem."

The consultation will be open from Monday 8 June until 9 August and will be found on the council's website: www.northdevon.gov.uk/consultations.