Since Saxon times, Barnstaple has served as a market town for the surrounding countryside. Traditionally, separate markets for meat, fish, produce and other goods were held in the streets of the town, with Friday appointed as the main market day for livestock from Queen Mary's time. 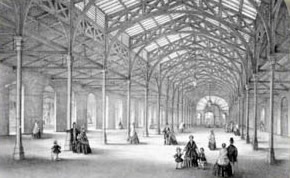 By 1672 a weekly pattern was established. The Town Clerk noted "Time out of mind there hath been three Market days for Flesh, Tuesday, Thursday and Saturday, which have been constantly used and kept as only days for sale of flesh; but several Butchers, being Burgesses, have of late brought and sold on Fridays, the Market day for selling corn and other sort of victuals, flesh excepted." 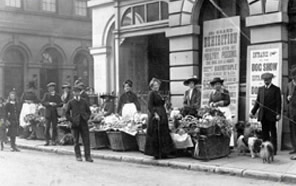 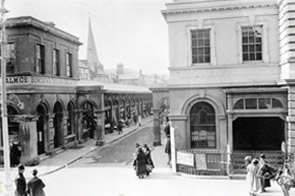 In 1826 the present Guildhall was built over the High Street end of the meat market, and after another Act of Parliament in 1852 planning began for the new Pannier Market. The present market, designed by the Borough Surveyor, Richard Davey Gould, opened in 1855 and linked High Street and Boutport Street. This was intended for vegetables, with a Corn Market and Music Hall built shortly after at the Boutport Street end. The displaced butchers were provided with the brand new Butchers' Row of permanent stalls.

Despite the misgivings of some townspeople the Pannier Market, as it became known, proved to be a great success. By 1897 Gardiner, one of the town's historians, was able to write: "The result is that Barnstaple can to-day boast of the possession of Markets such as many a county town might well envy. Indeed, Barum's Pannier Market is one of the finest in the Kingdom".

In 1811 the town Improvement Act included provision for new markets for both meat and produce. The meat market, with a corn market above, consisted of 34 stalls stretching from the High Street to Anchor Lane, about half way down the present Pannier Market. The towns people were reluctant to extend the market further at this time, as they feared the cost of buying the property required was too great and a Pannier Market would not be a success. Meanwhile vegetables and dairy produce were sold from the panniers in which they were carried to town, out in the open on either side of the High Street. 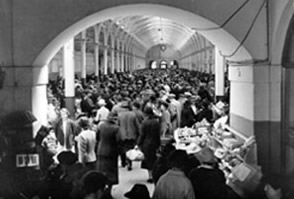 In the 20th century, the Pannier Market's fortunes fluctuated. Before the Second World War the Friday Market was the undisputed highlight of the week. Farmers from around the country brought their stock to market while their wives and children would sell fruit, vegetables and dairy produce in the Pannier Market. People from miles around would make the journey to town on foot, by bus or by carrier's cart. 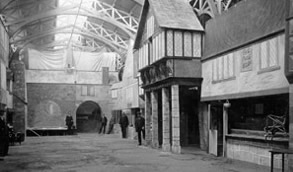 Walter Isaac of Cobbaton recalled how "On Fridays Bill Down, a coalman haulier, ran a Carrier Service from Chittlehampton to Barnstaple via Cobbaton with horse and long tail cart. This was best described as slow but sure. His load consisted of an assortment of bags and boxes. Mr.Stapleton began a similar service with a Model T Ford until the Friday it ran out of control down Codden Hill, spilling its passengers and several hundred eggs all over the road. Miraculously the passengers escaped serious injury, which is more than could be said for the eggs.

Before the days of supermarkets, the Pannier Market was the best source for many daily goods; the fore-runner of modern Farmers' Markets. As the 20th century progressed, patterns of farming changed, with less small-scale dairy work and much produce sold in bulk to middlemen and major retailers. But the Pannier Market survived and entered the 21st century selling a wider range of products on almost every day of the week.

Images from the North Devon on Disk digitised archive.